With its enduring charm and timeless aesthetics, the Calatrava collection remains one of Patek Philippe’s most iconic creations.

With their steadfast commitment to excellence, Patek Philippe has maintained a tradition of perpetual innovation throughout their rich history. They continue to reinvent and refine the art of precision watchmaking across their entire collection, including superlative chronographs, perpetual calendars and minute repeaters. However, their most significant contribution to the history of wristwatches may be among their most humble—the Calatrava.

Universally recognized as the emblematic expression of the round wristwatch, the Calatrava is one of the finest symbols of Patek Philippe’s spirit. Supremely elegant, the Calatrava charms each new generation of watch lovers with its understated aesthetics. The enduring quality of the design reflects the relentless pursuit of perfection that has always been at the core of Patek Philippe’s mission. 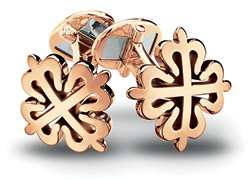 The name “Calatrava” is taken from the ornamental cross which is used as Patek Philippe’s emblem. Officially registered as Patek Philippe’s trademark in 1887, the cross itself is a centuries-old symbol used by an order of Spanish Knights that exemplified courage, chivalry and independence. Like the timepieces they represent, it is an aesthetically timeless symbol whose beauty remains despite passing trends; an ideal hallmark for representing the values of Patek Philippe.

The allure of the Calatrava began in 1932 when Patek Philippe was inspired to create a new style of wristwatch that emphasized sleek lines and subtle elegance. Patek used the circular form of the movement as its basis and crafted a simple design that is pure and unambiguous. The lugs were sculpted into the case and tapered for comfort. What really set the Calatrava apart, however, was its minimalist and modern dial design.

Abandoning the more elaborate designs of the Art Deco era that preceded it, the focus was on indicating time in the clearest and most attractive way possible. Hours were indicated around the dial by applied gold markers with two pointed and double-faceted Dauphine hands indicating hours and minutes. Adding subtle elegance, the seconds were displayed by a small sub-dial at six o’clock. These design elements are familiar to us today but were utterly revolutionary at the time of its creation. The Calatrava set the standard for precisely how a wristwatch should look, and the way it would continue to look through the 20th century and beyond.

These inimitable timepieces are impervious to short-lived trends and fashions. The Patek Philippe Calatrava Collection represents the very essence of timepieces that express elegance in its very finest form. Whether extra thin, with hobnail patterns or wide polished bezels, they are all unmistakable members of the Calatrava family and even their subtle variations cannot belie their origins. No other watch lends better expression to the true Patek Philippe style.

As Patek Philippe’s signature collection, the Calatrava is available in over 30 models that showcase ageless aesthetics. With very few of each manufactured, every timepiece is rare and exclusive.