The Allure of Aquamarine

Named after seawater, aquamarine’s fresh watery hue is a cool plunge into a refreshing pool.

For centuries, this timeless gemstone has been a symbol of youth, hope, health and fidelity. Since this gemstone is the color of water and the sky, it is said to embody eternal life. It was long thought that Aquamarine has a soothing influence on married couples, making it a good anniversary gift.

The ancient philosopher Pliny described the stone in these words: “The lovely Aquamarine, which seems to have come from some mermaid’s treasure house, in the depths of a summer sea, has charms.”  The very name aquamarine brings to mind the clear blue tint of the sea. The name is derived from two Latin words, aqua meaning water, and marina meaning sea. In ancient times, Romans and Greeks thought the gemstone was favored by their respective Gods of the sea, Neptune and Poseidon. When encountered with any peril at sea, sailors would simply toss their aquamarine amulets into the sea to appease the Gods and ask for safe passage. Aquamarine’s vitreous luster gives off a mesmerizing glass-like effect. In the middle ages, aquamarines were referred to as ‘magic mirrors’ capable of predicting the future. It was considered an oracle stone and used to make crystal balls for fortune telling. Even kings fell under it’s spell. One of the most famous aquamarines is the Hirsch Aquamarine. This huge 109.92 carat gemstone belonged to the House of Louis XV. It was fashioned into a pendant, crafted out of 18k white gold, and decorated with 118 diamonds. Its serene, cool color is said to calm the wearer. 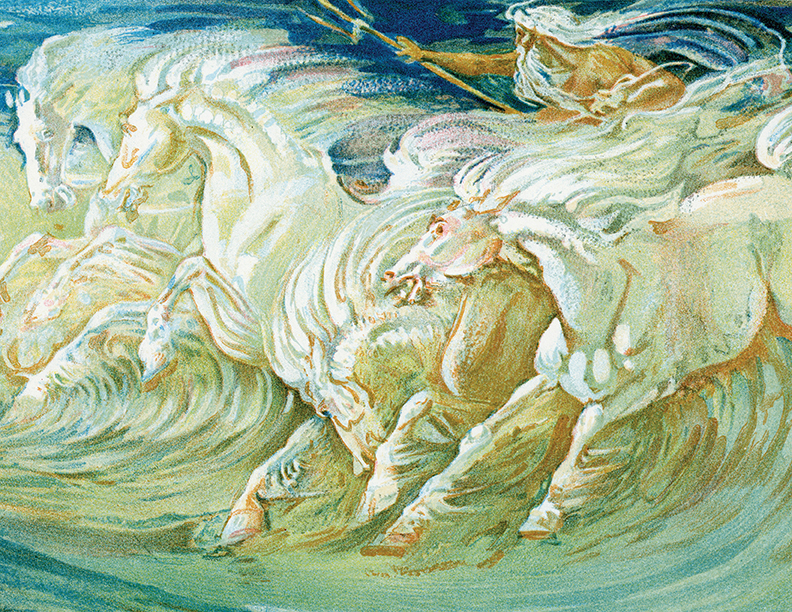 Legend says Neptune, the King of the Sea, gave aquamarine as gifts to the mermaids.

A Favorite Among Modern Designers

Aquamarine’s azure hue has captured the admiration of the 21st century. Since its color compliments almost every skin and eye color, it makes for the perfect gem to be used in a family heirloom treasured for generations. There is hardly any other gemstone in modern jewelry design which is refined in such a variety of ways as aquamarine. Designers take the world by surprise with ground breaking and modern artistic cuts. Whether it is fashioned as a clear, transparent gem in the classical step cut, or creatively cut in a more modern design, it is always fascinatingly beautiful. Without a doubt, these creative designer cuts have contributed to the popularity of this gem. The lucid color of aquamarine makes it easy to see inclusions. For this reason, aquamarine should always be of the greatest possible transparency. On the other hand, particularly charming effects can sometimes be achieved in the way the gemstone is cut by bringing the inclusions into play. The light color of aquamarine leaves the gemstone designer free to bring out the brilliance of the gem with fine grooves, notches, curves and edges. In this way, each aquamarine becomes a unique specimen, whose magical attraction no one can resist. 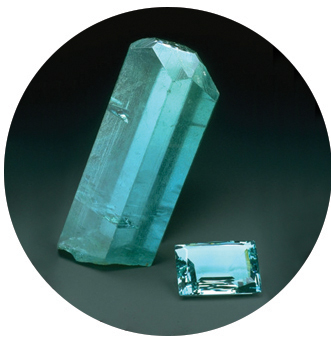 The 1,000-carat Most Precious aquamarine is in the collection of the Smithsonian Institution, National Museum of Natural History. 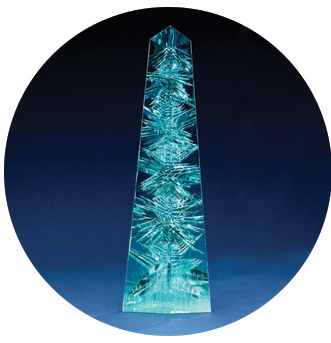 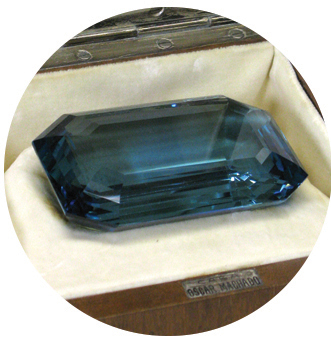 In 1935, the Brazilian government gifted a 1,847-carat aquamarine, now known as the Roosevelt aquamarine, to Mrs. Eleanor Roosevelt.

Aquamarine’s parents are magma and rain water. Under the right conditions, when this duo mix together, an aquamarine is born. Iron is the substance which gives aquamarine its color, a color which ranges from an almost indiscernible pale blue to a strong sea blue. Many aquamarines are greenish when mined and cut, and are heated to enhance their blue color. Heat treated aquamarines become permanently blue as the process removes the unattractive hues leaving behind the gorgeous sea water color. Most of the raw crystals for the world market come from the gemstone mines of Brazil. The origin affects the nuances of the gem’s color and size. The rare, intense blue aquamarines from the Santa Maria de Itabira mine in Brazil, which make every gemstone lover’s heart beat faster, are called ‘Santa Maria.’ Similar nuances come from a few gemstone mines in Africa, particularly Mozambique. To distinguish them from the Brazilian ones, these aquamarines have been given the name ‘Santa Maria Africana.’

AQUAMARINE SOURCES AROUND THE WORLD 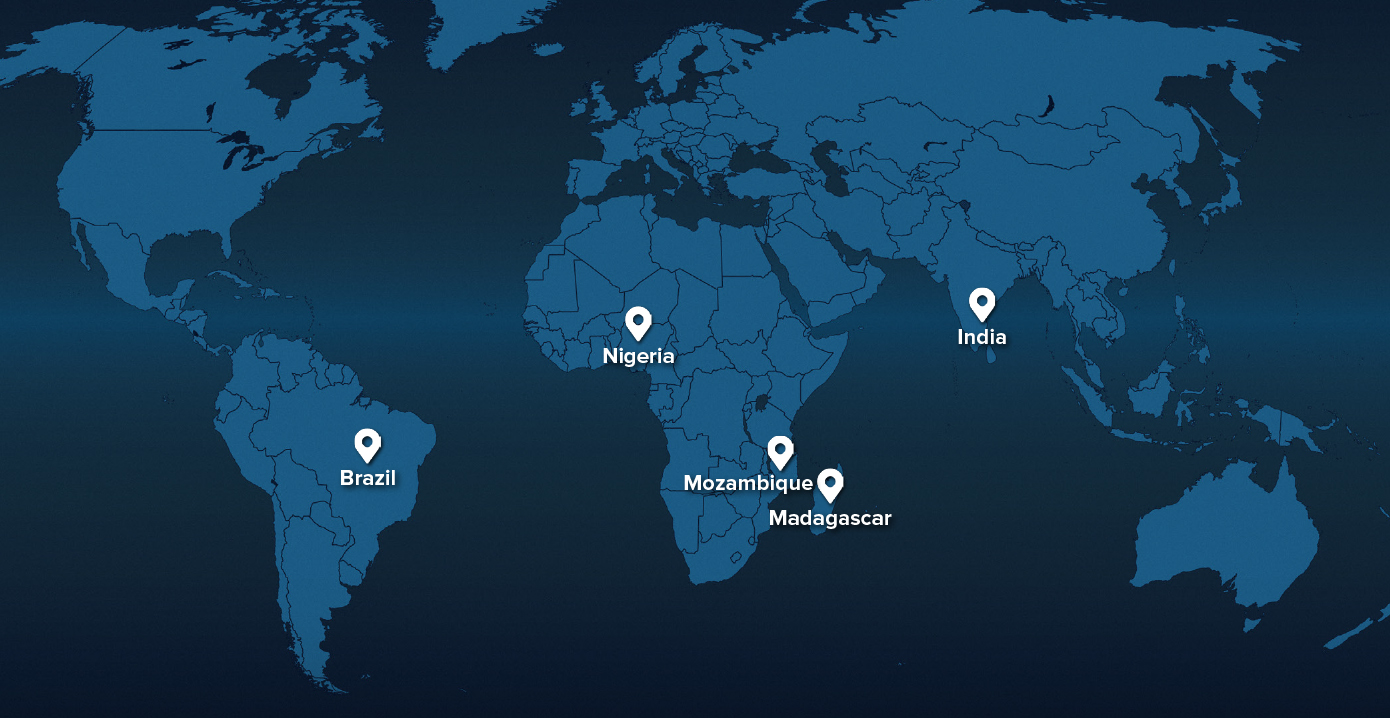 Color, clarity, cut and carat weight are some of the characteristics that determine the quality and value of the gem. The color tones of aquamarine are subtle and varied, most often exhibiting a beautiful ocean blue color, with subtle hints of green. Their soft luster is a wonderful addition to any natural colored gemstone jewelry collection. The more intense the color of an aquamarine, the more value is put on it. It is a pure, clear blue that continues to epitomize the aquamarine, because it brings out the immaculate transparency and magnificent shine of this gemstone. 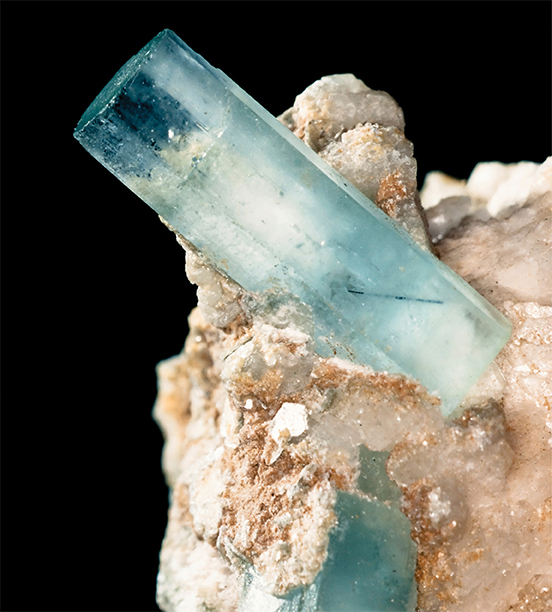 Aquamarine grows in beautiful six-sided prismatic crystals that on rare occasions can be more than a foot long. These crystals come in sizes from very small to very large—some even up to 100 lbs. Faceted aquamarine is often exceptionally transparent with vitreous luster, so well-cut gems really sparkle. The gem is pleochroic, which means it shows different colors in different crystal directions. Using a dichroscope, you can see aquamarine is near colorless and stronger blue in different crystal directions. Fortunately for aquamarine, the stronger blue color corresponds with the cutting orientation that retains the most weight.

In addition to traditional favorites like diamond, emerald or ruby, aquamarine is one of our most popular and best-known gemstones of the 21st century. The aquamarine is in fact related to the emerald, both belonging to the beryl family. The color of aquamarine, however, is usually more even than that of the emerald. Its azure hue is only one of many distinguishing qualities that demands admiration. Much more often than its famous green cousin, aquamarine is almost entirely free of inclusions.

» Read the story behind aquamarine’s cousin, the epic emerald.

» Browse a sample of our aquamarine jewelry.
» Learn more in our birthstone guide. 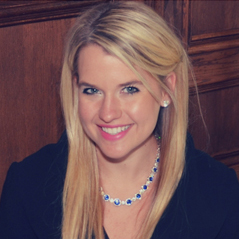 Jessica is our resident fashionista-in-chief and more formally our Diamond Department Manager. Helping guide our clients through life’s big milestones by helping them find the perfect piece of jewelry to last a lifetime is what she loves best! She is a Graduate Gemologist who has been infatuated with jewelry since she was a little girl, spending countless hours at her grandmother’s jewelry store. Have questions? Just Ask Jessica!