Take me Out to a Ball Game

We decided to head down to Florida and take in a few Twins Spring Training Games. We hadn’t been to the new ballpark and we were excited to see it. The Twins’ first game was an away game against the Red Sox. We thought it would be fun to see Jet Blue Park since it was only a few miles up the road from the Twins’ ballpark (Hammond Stadium). This was my first experience seeing a Twins game and not being the “home” team! The Red Sox fans were really nice. We had a little fun with some ladies in front of us since the Twins were ahead the whole game. I was impressed by their park. We had great seats for the beautiful 80 degree day. I loved watching the guy running out with his ladder to change the score… it was just like old-time Fenway! They had a great digital board where they showed the lineup, which I really like. It’s especially helpful for spring training where the lineup can change from one inning to the next with all the new guys and you don’t recognize who is up to bat. We had a chance to view a lot of new, young talent. Polanco had a nice home run in the 5th. I would definitely catch another away game at Jet Blue! After the game, we had dinner with Dick Bremer at a great Italian restaurant up the road. It was fun to trade observations and hear his take on the game and players. For all you fans out there wondering the same thing as I have always wondered— what constitutes whether Dick and Bert wear suits while broadcasting or if they wear polo shirts? The answer: 80-degree weather. If the temperature is 80 degrees or more when they arrive at the park, it’s polo shirt day! 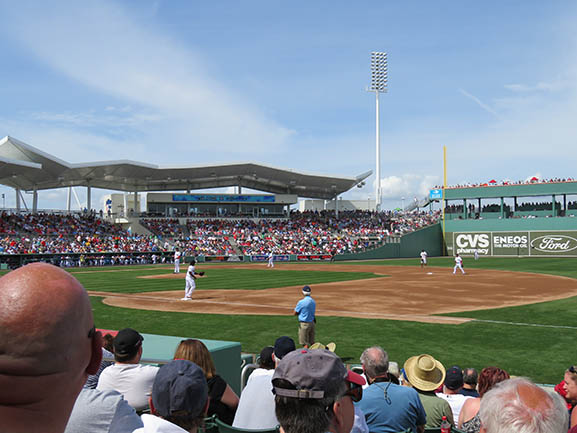 The following day we saw the home opener—it was a 7PM game on a beautiful 70-degree evening. We saw Rod Carew throw out the ceremonial first pitch, making this is his 53rd straight year at spring training. Torii Hunter also threw out the 2nd pitch. This was the first opportunity to see the Twins potential starting lineup. Brian Dozier had a hot bat and played a great game! It was nice to see Byung-ho Park get his first MLB hit, as he had struck out on all three of his at bats the day before. Danny Santana had a home run in the bottom of the sixth inning to tie the game. Unfortunately, the Red Sox had three hits in the eighth inning to pull ahead and win 6-5. The stadium was beautiful and we had great seats. Actually, I don’t think there are any bad seats in the stadium! 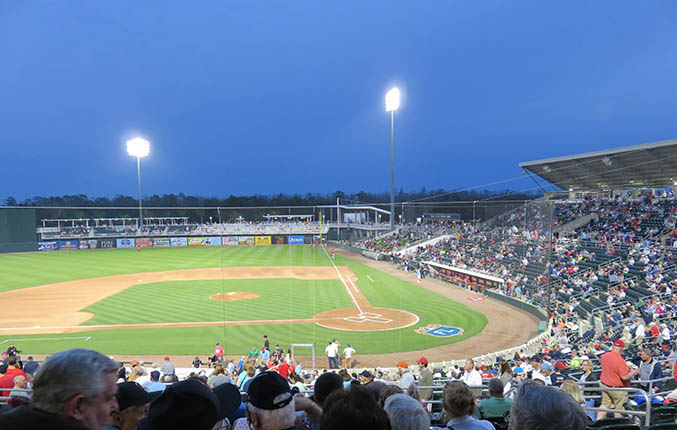 Saturday was the final game we got to see on our trip. At 73 degrees, it was another beautiful afternoon and this time our seats were in the shade! We played the Orioles and what a fun game that was to watch! Dozier started off the first inning with a home run, Rosario hit one in the fourth followed by Centeno with a homer in the seventh. The most fun was the sixth inning with the Twins scoring eight runs—they were on fire! The Twins won 13-2.

Spring training games are so enjoyable; the fans are laid back, the weather is great and Hammond Stadium is fabulous. I encourage any Twins fans to get out of the cold weather and head on down for a few games. It’s enough of a break to get you through the rest of the winter. When you return home, just don’t be fooled into packing away the snow gear… April has a funny way of sending us some unsought snowfall!