The Golden Age of Automobiles

The legendary 18th hole of Pebble Beach Golf Links is the most famous finishing hole in golf. It has been home to memorable moments and triumphant finishes in golf, but for one day each year, it is transformed into the most beautiful parking lot on Earth. Renowned as the world’s preeminent classic car show, the Pebble Beach Concours d’Elegance brings together the finest collector cars in the world to compete in the ultimate competition of technical merit, elegance and style. Located 120 miles south of San Francisco, the city of Monterey plays host to thousands of car enthusiasts who gather each summer to celebrate the heritage and tradition of the automobile. During Monterey Classic Car Week, the picturesque peninsula on the California coast is transformed into a car lover’s paradise with an array of events offering a veritable medley of things to see and do for motorsport enthusiasts. The Concours d’Elegance marks the culmination of the week-long spectacle and is certainly the grand finale of Monterey Car Week, but the events leading up to it are nothing short of amazing.

Encapsulating speed, endurance and style, the prestigious Pebble Beach Tour d’Elegance and Pebble Beach Concours d’Elegance combine to create the ultimate moving motoring museum. The Tour d’Elegance is an 80-mile road rally around the Monterey peninsula for the cars that have been accepted into the Concours. It is an excellent opportunity to see the amazing vehicles that will be showcased on the show field, and best of all, the cars are in motion! Spectators are transported back to the past as the drivers embark on scenic portions of 17-Mile Drive winding for miles through pine and cypress forests, dancing along dramatic cliffs on Highway One and then parading down Carmel’s Ocean Avenue for all to enjoy. 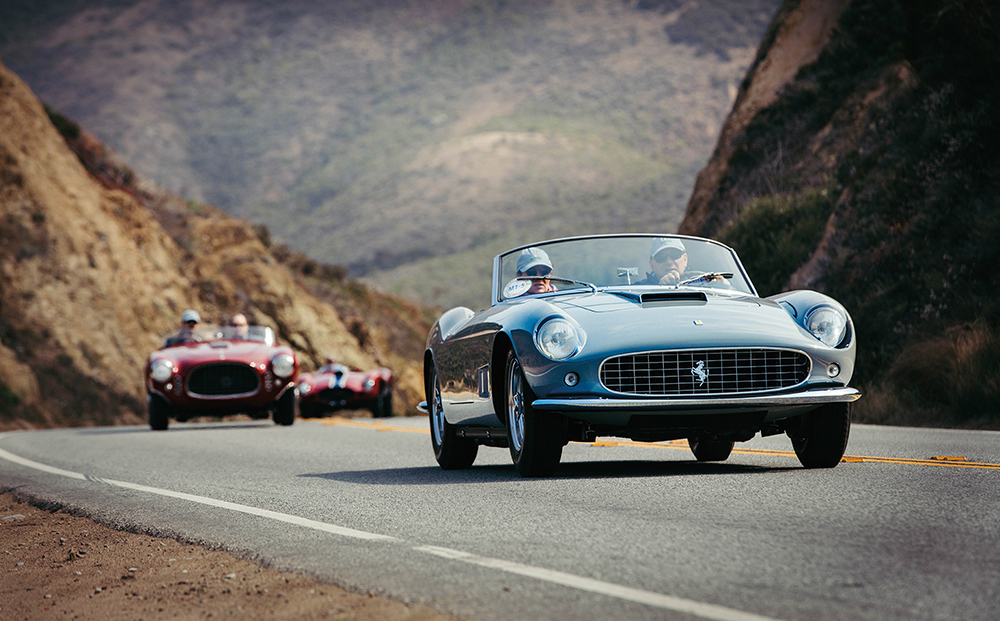 While seeing classic cars on a highway may be a treat, watching them compete on one of the world’s finest racetracks is a can’t-miss experience. Staged at the WeatherTech Raceway Laguna Seca, the Rolex Monterey Motorsports Reunion is the largest event during the Monterey Classic Car Week and showcases pre-and post-war race cars competing as they were originally intended. The famous Laguna Seca is an 11-turn racetrack just short of 2.25 miles long and features the most famous corner in American motorsports—the Corkscrew. The hard-left, hard-right corner combination possesses blind crests and steep elevation changes that require the ultimate performance from both man and machine. Between the entrance of turn 8 to the exit of turn 8, which is only 450 feet in length, there is a five-and-a-half-story drop. If a driver misses the turn from 8 to 9, the edge of the track drops ten stories. It’s exhilarating and scary to watch, but there is a genuine appreciation seeing hundreds of race cars compete on the track. Some of them are over 100 years old, and are as valuable as the cars on display at the Concours. Grouped in categories or classes, drivers in the “Historics” class are advised to be a little more gentile than they might be during a regular race, but they still push the limits and occasionally crash. The privilege for participants to enter the race begins at $29,000. As the weekend reaches its pinnacle, over 200 cars gather on the famed 18th fairway of Pebble Beach Golf Links for the Pebble Beach Concours d’Elegance. 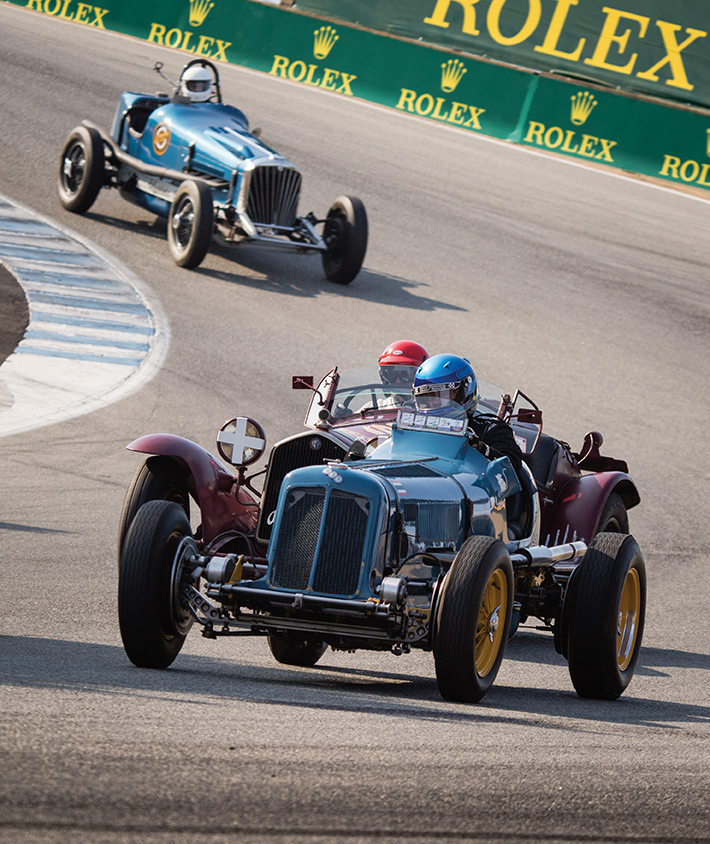 The pressure is on for group 2A (1927-1951 racing cars) during their qualifying run on the infamous Corkscrew. | ©Rolex/Stephan Cooper

A tradition that dates back over a half-century, the first Pebble Beach Concours d’Elegance was held in 1950 and showcased a mere two dozen automobiles. Over sixty years later this event has led to an even greater appreciation with aficionados now reliving the Golden Age of motor sport. Continually growing in both size and prestige, the 2018 Concours was brimming with 234 cars from more than 20 classes and eras. Only the very best collector cars are invited to be displayed in this elegant exhibition of classic automobiles. These participants are quite serious about their cars—spending hundreds of thousands of dollars to acquire the car, hundreds of thousands to restore it, and thousands more just to transport it to Pebble Beach. Competing for the favor of the judges who value historical accuracy, technical merit, and the more elusive quality-elegance above all else, each participant is vying for the coveted Best of Show award. The award is bestowed to the most stylish and elegant car, recognizing its originality and authenticity. Perfectly reflecting the spirit of the accolade, a 1937 Alfa Romeo 8C 2900B Touring Berlinetta claimed the Best of Show award against the striking backdrop of the Pacific Ocean.

The Pebble Beach Concours d’Elegance is a true gathering of the prestigious—and not just automobiles, but also people—it’s a veritable who’s who of the rich, famous, and powerful from around the globe. Immersed in nature and surrounded with elegance, the Pebble Beach Concours d’Elegance is an incredible experience for car collectors, enthusiast, and connoisseurs of the exceptional. As you stroll off of the Concours show field on the 18th fairway of Pebble Beach, fully satiated from admiring a half-billion dollars of elegance, the realization hits… there hasn’t been a basic Ford or Chevy sighting in days! 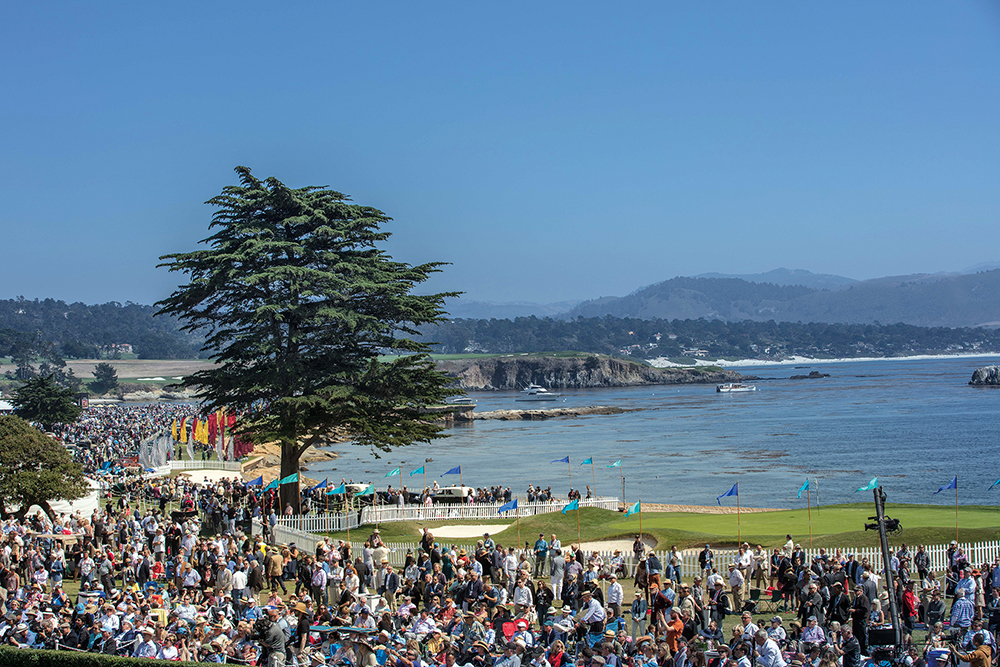 More than 20,000 people descended on the peninsula as car collectors and enthusiasts alike gathered for the Pebble Beach Concours d’Elegance. | ©Rolex/Tom O’Neal

If you are looking to acquire a fine vehicle, you have six major auction houses vying for your dollar. This year sales hit a record $371 million. Perhaps the bigger headline was the 1962 Ferrari 250 GTO that sold for $48.4 million, the highest price ever paid at auction. Accompanying that record was a 1935 Duesenberg SSJ Roadster that, at $22 million, was the highest price paid for an American car.