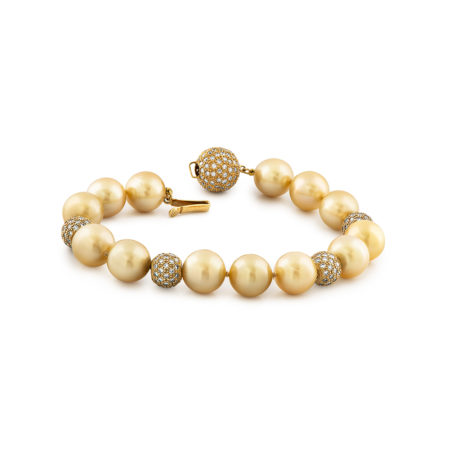 This spectacular pearl bracelet is an exceptional detour from the traditional jewelry staple. The warm tones emanating from the striking South Sea golden pearls are enhanced with over four carats of round brilliant diamonds delicately set into 18k yellow gold beads. This elegant bracelet is the perfect accessory and will add subtle sophistication when adorning the wrist.

In all of human history, mankind has admired, even worshipped, pearls. Persian mythology called them “the tears of the gods.” Ancient Chinese legend claims the moon holds the power to create pearls, instilling them with its celestial glow and mystery. Pearls are unique because they are the only gemstone formed within a living creature. Since natural pearls are rare and difficult to recover from the ocean’s depths, man invented the technique of culturing salt and freshwater pearls from mollusks carefully seeded with irritants similar to those produced by nature.