Off The Field with PJ Flect

As a society, we are superficial observers. We form split second opinions all day long on snippets of what we may see or hear. We cast our judgements—love or hate—but how well do we really know someone in the spotlight? As the head football coach at the University of Minnesota, PJ Fleck is known for his boundless energy and unrestrained personality. He is one of the most charismatic leaders in all of football with a fierceness on the field that is matched only by his enduring charm off the field. Whether on or off the field, PJ is a human Energizer bunny that just keeps on going. Where did this endless energy and perpetual passion come from? These traits aren’t new or unauthentic; this vim and vigor can be traced back to the sweet little town of Sugar Grove, Illinois where PJ spent most of his youth.

Young PJ was so energetic as a child that his mother took him to several doctors, explaining that he has so much energy that he can’t sit still and won’t sleep. Today he would be diagnosed or labeled and most likely prescribed medication, but his mom’s solution was to enroll PJ in every activity she could find. He played four sports so when one sport ended, there was always a new one starting. His mother was so determined to keep him busy that she even enrolled him in his older sister’s pottery class, much to his sister’s embarrassment. PJ’s dad worked full-time for AT&T and when he wasn’t working, he was usually coaching. As a coach’s kid, the expectations were always higher for PJ. His dad’s coaching style wasn’t about how many strikes PJ threw in baseball, it was all about how he handled himself when he was throwing balls instead of strikes. He taught PJ the importance of how to carry yourself, whether winning or losing, and the importance of never giving up.

The Value of Hard Work

Living in a small farm community and growing up with a cornfield in your backyard, it’s only fitting you participate in the annual Sugar Grove Corn Boil. If you are the son of Mr. Fleck, who was heavily involved, you would shuck corn like the other kids, but unlike the other kids, you wouldn’t be paid for doing it. His dad would always say to PJ, “Why should you get paid for something the town is going to do for your enjoyment? You need to give your time.” In that moment PJ learned that giving the gift of your time was far more important than just giving something to somebody. Those small town lessons and core values that he was taught at a young age have become guiding principles in his life as a father, a coach and as a public figure.

Even a packed schedule full of sports and activities couldn’t get PJ out of doing family chores. In the Fleck household, you did what you were asked to do and you didn’t get paid for helping out. It wasn’t until he was 16 when PJ got his first paying job as a busboy at the Fisherman’s Inn, the fancy restaurant in town. Whether in sports or at work, his competitive spirit thrived and pushed him to be the best regardless of the situation. “I wanted to be the best busboy,” Fleck said. “The waitress with the best section got to pick the busboy first, then it goes down the list. I was going to make sure I got picked first.” The restaurant was known for its fresh rainbow trout that was caught daily in ponds located behind the restaurant. The busboys were responsible for fileting the fish and they had to be deboned effectively and efficiently. PJ’s Catholic guilt would set in if he walked by a table to see a patron pulling a bone out of their mouth. He was always quick to stop at the table to claim responsibility, be accountable and say, “I’m so sorry, I fileted that fish.” This lesson in accountability still lives with him today. These early busboy days are where PJ learned to take pride in his work and responsibility for everything he put his name on, whether for himself or others.

Growing up in Illinois, the Fleck family enjoyed spending family time and taking vacations in Wisconsin, usually St. Germaine or Lake Geneva. PJ was always drawn to the water and found nature to be extremely peaceful and spiritual. A bald eagle commands his attention every time one soars above him. Even at practice, if PJ sees a bald eagle, he will make everyone stop to look at the eagle. His love of water and nature has only grown stronger over the years. PJ and his wife Heather have a lake home where the whole family spends time enjoying life on the water. From wake surfing and tubing to jet skis and kneeboarding, PJ doesn’t miss a beat. Although he admittedly had to give up his days of extreme tubing because his shoulder didn’t appreciated the beating. Instead, he’s taken up wake-surfing as a fun, lower-impact activity for days at the lake. 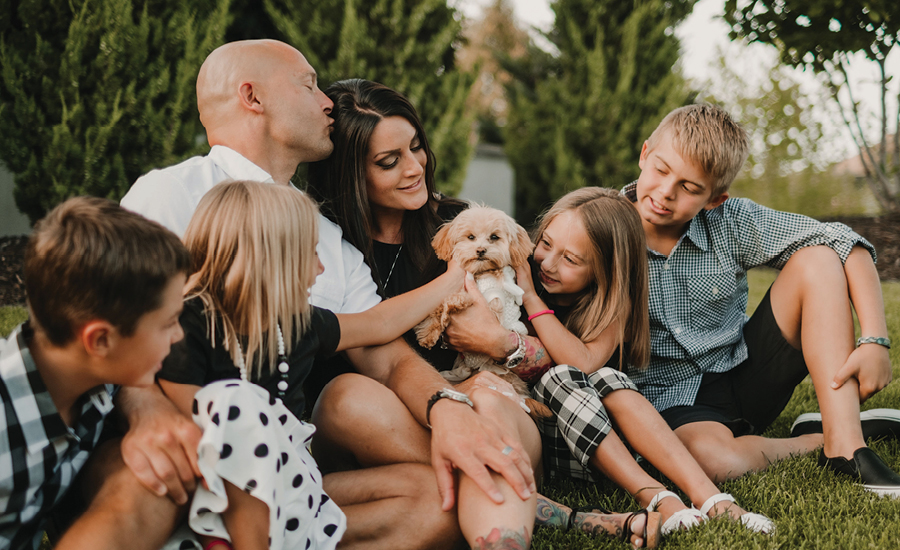 In 2016, PJ married his wife Heather, a competitive match made in heaven. They both enjoy many of the same things, which leads to plenty of friendly spousal competition. Whether playing Rummy, Spades, or their favored Skip-Bo, PJ and Heather genuinely enjoy battling against each other. There can be a lot at stake but their wagers are friendly— choosing the activity or where to go to dinner– but that doesn’t make the competition any less intense. “Instead of flipping a coin, we play for it,” Fleck said. “It’s our way of compromising in our marriage.” That same competitive gene has been passed on to the Fleck children as well. There’s plenty of friendly competition in yard games, video games, and yes, all sports! As competitive as they are, Heather and PJ made a pact long ago that they would not coach their children in sports. “We want them to stay focused on getting better, not worried about pleasing us.” said Fleck. “We learn the names of all the kids on the team, and we cheer all of them on.” When it comes to sports, the Flecks never focus on the outcome of the game with their children, instead they focus on the process. PJ and Heather never ask them if they won or lost, even though the kids always want to tell them about the score. “We ask them, ‘Were you a good teammate?’ ‘What did you get better at today?’ ‘What do you need to work on?’” said Fleck. “I’ve never asked them, ‘Did you win?’ That does not matter.” Of course winning is great, but it all goes back to sportsmanship. Keeping score is a part of life but the final score isn’t as important as how you played the game. “Teaching kids about how you win is really important. If a kid never knows the feeling of failing, they’ll never be successful.” Says Fleck.

Four years ago, the Gophers were playing at Michigan and they lost 33 to 10. PJ had just come from West Michigan so everyone there knew who he was. After the game, PJ was walking into the tunnel with his son under his arm when the Michigan fans went off. For the next minute and a half, the Michigan crowd doused him with insults that could fill a dictionary of complete hate; words his nine year-old son should never have to hear. PJ looked down to see his son bawling and his son asked, “Why are they saying all those things about you?” That’s when this coach switches back to dad mode and becomes emotional. As difficult as this situation was for PJ, he knows that there’s always a lesson to be learned. “If people are going to say those things, they probably don’t know your dad.” Fleck remarked. “They’re not necessarily attacking me, they’re attacking the job I do, which is very public.” While PJ is just another dad on the sidelines for his kids’ little league games, he’s still a high-profile sports figure with all the baggage that comes with it. Too often with public figures we only see them as a figure and not as a person. “Everybody wants me to win; I want to win,” Fleck said. “Coaching is what I do, it’s not who I am.”

It’s said that some things never change. It doesn’t matter where you grow up, you are molded and influenced by your family and the community that you live in, whether big or small. Many of the morals and values you learn help shape who you become, and if you are lucky, you may even retain some of that boundless energy you had as a kid. Love him or loathe him, PJ Fleck has an energizing soul packed with wisdom and intellect learned from a caring community and loving family. With his level of passion, magnetism and vigor, there is no question that PJ Fleck is elite, both on the field and off.

See the full issue of The Wixon Experience 2021 | Volume 8