The rich and radiant emerald has inspired legend and lore for over 4,000 years.

There is no gem more mysterious than the enigmatic emerald; this color of paradise has inspired legend and lore for well over 4,000 years. Many of the world’s most powerful men and women have coveted this illustrious beauty for centuries. Emerald’s rich history is woven with powerful tales of desire, greed, reverence and worship. Throughout the ages, this prominent gemstone was celebrated by the Incas and Aztecs and coveted by historical figures such as Queen Cleopatra, King Arthur and Alexander the Great just to name a few.

The story of emeralds, according to legend, began thousands of years ago in Colombia. A Goddess named Fura and her husband Tena reigned over Muzo, a source of the world’s most famous emeralds. Fura’s love was sought by many, and eventually she succumbed to temptation. The Gods punished both Fura and Tena for her infidelity and sentenced them to an eternity together by turning them into two mountainous cliffs. From within these depths, Fura’s tears turned into beautiful green emeralds. Today these cliffs rise above the valley of the Minero river, one of the most prized locations of the rare and spectacular Colombian Emeralds. It’s no surprise that epic tales such as these have made emerald an international superstar. It takes extraordinary conditions for emeralds to form, causing them to be twenty times more rare than diamonds. The most recognized source of this rare gem is Colombia along with Zambia, Zimbabwe and Brazil. The color of Colombian emeralds is in a league of its own. The unique conditions in which they are formed create their prized velvety vibrant green color. They also tend to display a general warmth, or glow, to them that enhances their rich appearance and separates them from other sources. 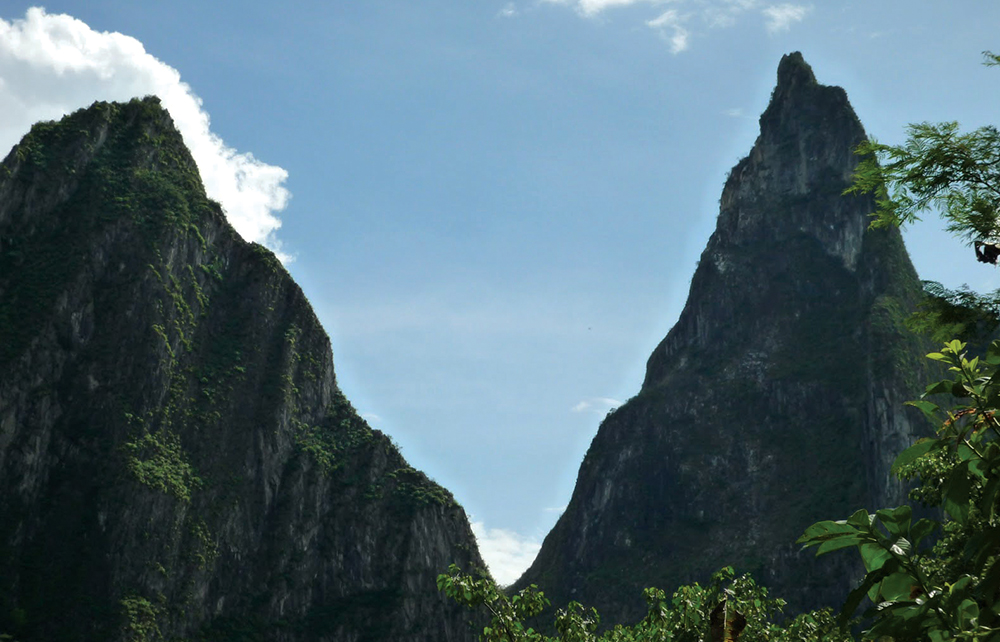 Rising high above the valley of the Minero River, the Fura and Tena Crags are the official guardians of Colombia’s emeralds.

Emerald’s impressively rich color is the key trait used to determine value. The most desired hues are green and bluish green that are intense and vivid in saturation. Emeralds are also pleochroic, meaning they can display different colors when observed from different angles. This can create a challenge for gemcutters, who plot every facet and angle with the end result in mind. This isn’t the only challenge gemcutters face. Emeralds are one of the very few gemstones where eye-visible characteristics, known as inclusions, are acceptable. These inclusions are sometimes referenced as jardin, the French word for garden. The description is well-suited, as they can have a moss-like appearance. The jardin will vary depending on the emerald’s country of origin. Some locations, such as Colombia, are more prone to display jardin while others, such as Zambia, are less visible to the eye.

The prices of rare emeralds are starting to soar, much like fine-quality sapphires and rubies. The increased interest and limited availability of this mysterious gem has made it a darling to collectors and connoisseurs worldwide. This rich radiant green gem will continue to capture the imagination, mesmerize the mind and soothe the soul as long as it remains available.

» Read about the magic of Black Opals

» Read about Emerald in our Gemstone Guide

» Browse our collection of Emerald Jewelry